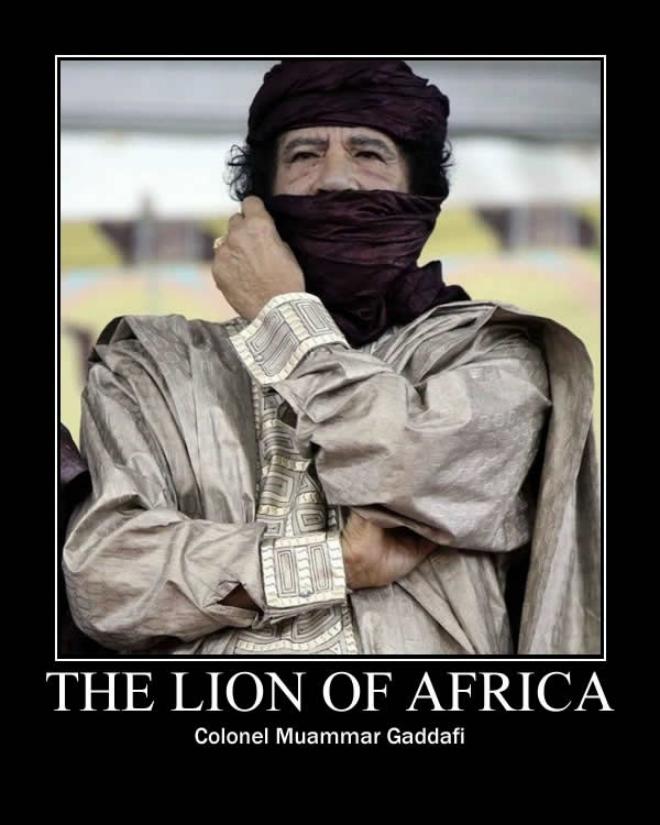 “Contend not of those who are slain in a approach of Allah ‘they are dead’. Nay, they are living, yet we understand it not…finding their living in a participation of their Lord.”

Today, Friday October 21st, our beloved Brother Leader and one of the world’s greatest freedom fighters, revolutionary pan-Africanist, Muammar Al Qaddafi was martyred in combat by the North Atlantic Tribes, organized under the banner of NATO, bolstered by the Arab sheikhdoms, including Al Jazeera’s boss, the Emir of Qatar, the pseudo Islamic House of Saud and the US’s own hideous creation, Al Qaeda. These North Atlantic Tribes constitute the same forces that have murdered our leaders, invaded our lands and plundered and ransacked our resources for more than 500 years. Muammar Qaddafi bravely stood against them all, making his last stand today, after a lifetime of struggle, in Sirte.

In the early 80s, I was selected from the International Revolutionary Committees Movement to be a member of an international battalion to defend the Al Fateh revolution. I was also a founding member of the World Mathaba based in Libya. I am proud and honored to have served under the Brother Leader and have had the opportunity to play a part in the noble struggle he represented. I knew Muammar Qaddafi and the man I knew was no tyrant. He was brilliant and profound, a man of honor, courage, strength and great integrity. He spent his entire life fighting on the side of oppressed humanity – the poor and the powerless worldwide. He assisted all those who asked for help with their just struggles. His decision to assist was never based on Libya’s geo-political interests, but rather on the Quranic injunction which commands all Muslims to assist those fighting a just cause. Under his guidance, organizations and movements that had never before been included in any international formation, or given any international recognition or assistance became members of the World Mathaba, including indigenous organizations from throughout the Americas and worldwide and groups such as the Rumanian Gypsies.

Muammar Al Qaddafi stood against all forces of tyranny, tirelessly campaigning for human emancipation and dignity from the age of 27, murdered in combat at his post, age 69. The Lion of Africa is dead, but like the Hon. Marcus Mosiah Garvey before him, he has left millions of cubs in the bushes and in the desert. They can kill the man but they can never kill his profound ideas. His legacy is only made stronger by his martyrdom.

We, the millions worldwide, who loved him and supported him in life, will continue to fight on after his death for the noble cause he stood for. His martyrdom does not weaken us but only serves to inspire. We knew this man well enough to know that he would never run and would stand with his people at his post until the end. We salute his bravery, even at his advanced age, he never once wavered.

We say to the representatives of ‘the Beast’, Obama, Sarkozy, Cameron, Clinton who only a day ago ordered the murder of Qaddafi, and the Arab minions who gave credence to this war, that you will surely find your rightful place in the bowels of hell. You dared to take our most beloved and heroic African elder and murder him mercilessly and then show grotesque depictions of your evil deed on TV screens worldwide, and in the same breath preach democracy and civilization to us. With your murderous war machine you killed thousands in cold blood in Sirte and throughout Libya, hiding behind a few thousand rebel rats and lying to the world about a civil war and humanitarian intervention. You brazenly imposed a regime in Libya that is anything but democratic, but know this: the battle is not over – this struggle continues and with greater impetus following the martyrdom of our leader. The Muammar Qaddafi that I knew would not want us to mourn him but rather to organize and carry forward his mission. And make no mistake, as your empire crumbles, our day will come in his name.

On this day, on behalf of the Black Consciousness Movement of Guyana and in the memory of revolutionary Pan-Africanists Kwame Ture, Cleo Hancilles, Michel Kapel, Tim Hector and many other brothers and sisters who are no longer with us, all of whom loved Muammar Al Qaddafi and fought for the realization of his vision, we send our deepest respect to his wife Safia Qaddafi and his entire family. Our prayers are with you. He is father to us all – he called us his sons and daughters.

May he and all the martyrs from Libya and across Africa murdered with him, rest in peace. Rest assured that their sacrifice will not be in vain.

This page may be republished for non-commercial purposes as long as reprints include a verbatim copy of the article in its entirety, respecting its integrity and cite the author and Libya 360° as the source including a live link to the article.