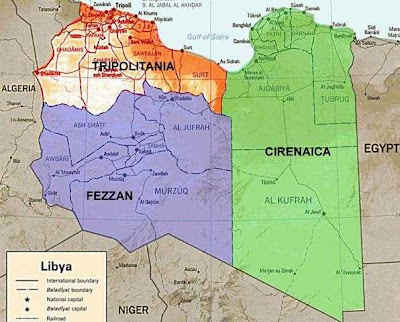 The “balkanization” {vulnerable to internal ethnic conflicts that when destabilized result in unmanageable regional problems} of Libya was the globalist plan from the outset.

An Imperialist Project To Create Three Libyas
The Old Imperialist Project To Divide Libya In Three Has Been Executed
Globalization And The War On Libya Series, Parts I – III
Israel And Libya: Preparing For The Clash Of Civilizations
Partition Of Libya Underway?
The Libyan War And The US-EU Plans For Africa And The Middle East

“History has been warped, there is an attempt to monopolize the media information about Libya, and the victims have become demonized as the aggressors by an unholy coalition of corrupt governments, media networks, and major corporations led by Washington.

At the same time, the war against Libya is one that could never have happened if Libyans did not fight one another.

There is an analogy that is worth mentioning regardless of one’s beliefs: the Devil cannot hurt people, he gets people to hurt one another. This is what has happened in the case of the Libyan Arab Jamahiriya. The downfall of Libya has been through Libyans fighting one another. This is how Washington and its cohorts invited themselves into bombarding Libya. There is no question about it; Libyans must stop fighting one another if they want to save their country. They must also address the issue of internal corruption.”I

These internal conflicts had nothing to do with Muammar Gaddafi. He was the chosen scapegoat, one who was unjustly blamed for an ancient hatred that originated long before he was born. He offered what he believed was a solution, but not all could rise to his vision of what was possible for Libya and Africa.

He was an peacemaker, negotiating logical solutions between rival factions.

Now that the Brother Leader is gone, the question remains whether the people will allow internal conflict and corruption to destroy them from within and accept the partitioning of their nation or unite instead to overthrow the imperialist usurpers and return Libya to her sovereign and dignified state, the jewel in the crown of Africa.

Only a unified Resistance can successfully confront and defeat NATO and thwart the imperialist project for Africa and the Middle East.

Benghazi’s Declaration for Semi-Autonomy Comes As No Surprise

After having initiated the uprising that eventually ousted Muammar Gaddafi last September, on March 6th, authorities in Benghazi, through their leader,Ahmed Zubair Senussi, declared the semi-autonomy of their Cyrenaica eastern region, from the Tripolitana. Senussi is a relative of the ousted King Senussi.

Six months after the fall of Gaddafi, such a decision should not come us a surprise. There are indeed several reasons that may explain the current situation in Libya.

Firstly, beyond the ousting of Gaddafi lays a strong historical distrust and animosity from Benghazi vis-à-vis Tripoli. Under King Senussi, Benghazi was the capital city of Libya. Moreover, Benghazi is also known to be a city of dissent and of opposition movements. It is only when Gaddafi came to power in 1969 that Tripoli became the political and economic epicentre of the country.

Secondly, in the current highly unstable situation across the country, those in charge of the eastern capital have undoubtedly remembered the old days under Senussi’s reign whereby Libya was from 1951 to 1961 a confederation composed of three autonomous regions: Cyranaica, Tripolitana and Fezzan. This confederation was based on the 1951 Constitution that was then amended in 1963 and discarded in 1969 when Gaddafi came to power. Benghazi’s leaders have therefore done nothing but to reactivate this old idea.

Thirdly, despite the fact that 80% of the total Libyan oil is allocated under its soil, Benghazi and the Cyranaica region remain poorer than the Tripolitania. This is explained by the deep neglect of the region during Gaddafi’s reign. By declaring the semi-autonomy of the region, the eastern leaders intend therefore to correct this situation. And it is for this same reason that Tripoli has reacted strongly against the move to autonomy.

Additionally, the leaders of Benghazi argue that the February election law adopted by the centralised National Transitional Council (NTC) does not take into consideration the demographics of the country. Indicatively, the Cyranaica region will be allocated only 60 out of 200 seats at the assembly for the elections of next June.

Furthermore, the NTC remains a very heterogeneous group, initially with just one shares purpose: to get rid of Gaddafi. The people forming the NTC have undoubtedly little in common and this weakness is coming to light today. In addition to this, the NTC has so far been rather incompetent in governing the country, which has led to a growing dissatisfaction of the population. Problems range from human rights abuses and atrocities occurring across Libya, to the large number of militias who harass the population, as well as the slow pace of political reforms. All of these factors should be taken into account to understand the current dramatic situation in Libya.

Last, but not least, the growing personal ambition of those in charge of the country today for whom the unity of the country may not be the priority. Let us not forget that Libyans have little, if no experience of democratic political culture.

Also, having said that, it is difficult to take seriously the recent statements by NTC chairman Mustafa Abdeljalil, who was quick to accuse ‘foreign Arab influences’, whom he couldn’t name, for being behind Benghazi’s declaration. According to him, Arab countries, as well as some remnants of the former regime who have infiltrated the NTC lines are behind all this agitation.

What is next? Abdeljalil reportedly said that the NTC would defend national unity, using force if necessary. Such a declaration is not only dangerous as it could enflame the current crisis but also, using force would only worsen the current instability. It is important to underline that the power struggle that has just erupted between Tripoli and Benghazi may not end any time soon. As the elections for a new constituent assembly due next June could well be postponed if no agreement is reached rapidly. What is very likely to happen is that no common strong agreement will come up in the near future. Eventually either the country will remain ruled from Tripoli, yet after a tough political and perhaps military battle, or schism may finally occur, not only between the Tripolitana and the Cyrenaica but also with eventually the Fezzan region.

Indeed, this move from Benghazi may be emulated by the Fezzan region which could also demand its own autonomy. This would in the short to medium term dramatically weaken the state of Libya which, it is important to recall, has no real political experience. Libyans have yet to learn the skills of living within a pluralistic political culture.

Furthermore, one could argue that the geographical integrity of the state that may well be at stake. A recent poll indicated that 16% of the Libyan population was prepared to resort to violence for political ends. Not only is this poll cralarming, but this figure could increase in the event of profound and growing discrepancies across the country.

It is estimated that 700 militias operate in the country without any authority, making them believe they are above the law. Most of these militias have so far refused to be disbanded and are therefore a threat to the national stability. Also, pro-Gaddafi elements still remain in the country, principally in the region of Beni Walid, South-West of Tripoli. These people could well take advantage of the situation to align itself with one group – most likely Benghazi – to create deeper chaos across Libya. With an unknown number of arms circulating across the country, added to the current instability of Libya, this volatile situation could well spill over across the entire region. All the arms and ammunitions that were shipped from Qatar and other Arab and European countries to the NTC in Benghazi in the early days of the uprising would definitely be a danger for both the Libyan population as well as for the country. The on going events in Libya certainly signify that the country is at a high risk of profound and durable instability, not to say a civil war.

In this regard, it is important to recall that in Libya, more than in any Arab country in the region, tribal cleavages are ancestral. One of the reasons Gaddafi managed to remain in power for more than forty years is due to his shrewd manipulation of these tribes – an important aspect the leader of the NTC appears to have neglected. Indeed, once the latter came into power, Mustafa Abdeljalil should have rapidly brought together all the tribal leaders, to not only strengthen the NTC’s central position but also to put an end to these militias which put Libya at a risk of implosion. As indeed, individuals in Libya would be loyal to their tribesman before any central government.

The leaders in Benghazi stated that they would run their own government, parliament and administration and would manage the financial affairs, leaving the control of oil revenues, foreign policy and the national army to the centralised government in Tripoli. However, although members of the Benghazi committee has stated that the aim of their regional government is motivated by administrative purposes only and neither independence, nor separation were on their agenda, this is nonetheless not a positive start for the post-Gaddafi era. The situation in Libya looks rather gloomy and it will take a great amount of patience, wisdom and political manoeuvring for Libya not to be divided.

It is important here to recall the position of the African Union prior to NATO’s intervention in Libya last year, which raised its concern for the future territorial integrity of Libya. Six months after the fall of Gaddafi, the AU’s warnings are sadly coming true..

All in all, when looking at the current situation in Libya, it is difficult not to see the result of irresponsible politics conducted by NATO. And a weak Libya is definitely not good for the North Africa region or for the rest of Africa.

Abdelkader Abderrahmane is North Africa senior researcher in the Conflict Prevention and Risk Analysis Division of the ISS.

ALSO SEE:
Libya In The Great Game: The Road To A New Partition Of Africa
The Balkanization Of Sudan And The Redrawing Of The ME And N. Africa
Foreign Intervention Behind The Creation Of South Sudan
Keith Harmon Snow – The Partitioning Of Sudan

© Copyright 2011-2012 by Libya 360°. This page may be republished for non-commercial purposes as long as reprints include a verbatim copy of the article/page in its entirety, respecting its integrity 9including all links) and cite the author and Libya 360° as the source including a live link to the article/page.